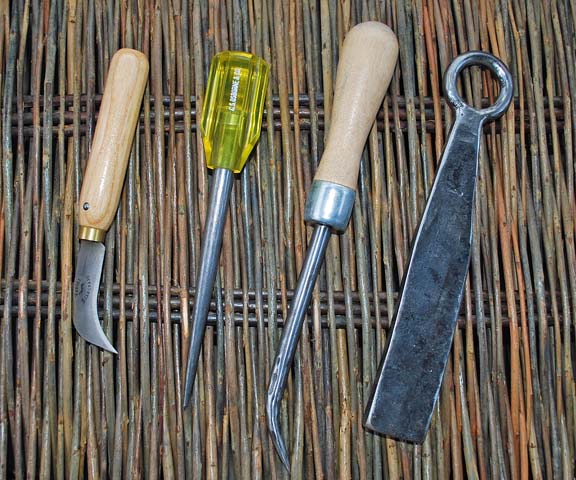 Above is a photo of the tools we sell at Katherine’s willow basketry classes. These aren’t the only tools that are needed to make willow baskets, but they are the ones that people don’t often have. The small curved knife is imported from the Vergez Blanchard company in France.They make a range of tools primarily for leather workers. Katherine bought her first Vergez knife from Jenny Crisp at the Basketmakers Association Spring Course at York in 2006. The small curved blade holds an edge well and the small round wood handle fits in the hand nicely for tasks like cutting scalloms. After searching for a similar knife with unsatisfactory results, we decided to import the Vergez knives from France. 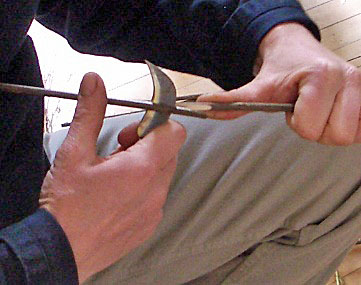 The straight awl made in the US by the C.S. Osborne company can usually be found at a good hardware store, but we keep some on hand as well. The awl is used when passing a rod into or through the work or just holding the work to the lapboard. The curved awl and the rapping iron are made by Dave Swanson in nearby Bow, Washington. Dave is a blacksmith (among other skills). Katherine met Dave after his wife Wendy took a class with a visiting English basketmaker that Katherine organized. He has made quite a few rapping irons for Katherine and recently made a few curved awls as well. The rapping iron, as its name suggests, is for tightening up the work when weaving. The curved awl is used for tasks like inserting handle liners. Another essential tool is a good pair of pruning shears. We sometimes have Felco shears on hand for sale. We particularly like the #6 which fits smaller hands.Current prices for these tools are $32.50 each for the Vergez knife, the rapping iron, and curved awl; and $14 for the straight awl. 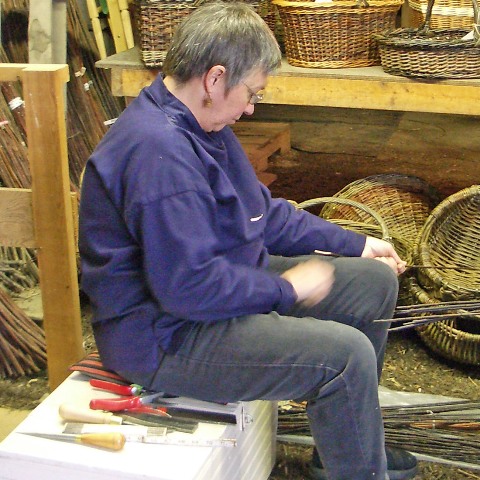