Katherine Lewis is a basketmaker in the Pacific Northwest where she has been weaving willow since 1992. She works on her farm near Mount Vernon, Washington where she grows selected varieties of basketry willow allowing her to choose from an array of natural colors and weaving qualities. Katherine’s goal is to weave willow baskets that are functional and durable while reflecting the natural beauty of the willows.

Katherine has studied with accomplished basketmakers from England, Switzerland, France, and Scotland; including traveling four times to the UK and Europe to tutor with basketmakers, tour the willow growing areas, and learn more about the willow basketmaking traditions. An extensive background in traditional European techniques coupled with willow growing has given her the abilities and inspiration to pursue this traditional craft.

Katherine has been invited to exhibit her work by the Anacortes Arts Festival, La Conner Arts Alive, Museum of Northwest Art, Skagit Historical Museum, Schack Art Center (Everett, WA), Bellevue Arts Museum Arts Fair, Museum of Contemporary Craft (Portland, OR), The Bascom (Highlands, NC), the Philip Dickel Basket Museum (Amana, IA), and the Fuller Craft Museum (Brockton, MA). In 2011, three of Katherine’s baskets were acquired by the Smithsonian American Art Museum through a generous donation by basket collectors Steven Cole and Martha Ware. Katherine’s baskets are also in use in hundreds of homes across the country.

Katherine began teaching basketry in 2004. Her classes emphasize different techniques and styles of stake and strand willow basketry. She teaches at home in Mount Vernon, as well as traveling to teach by invitation from basketry groups including the National Basketry Organization’s 2013 biennial conference at Arrowmont School of Arts & Crafts.

Katherine was a featured artist in the National Basketry Organization Quarterly Review (Spring 2013) and profiled in the article “Katherine Lewis: Willow Basketmaker” in Shuttle Spindle & Dyepot magazine (Spring 2010) published by the Handweavers Guild of America. Her work will be included in the upcoming exhibition catalog for The Cole-Ware Collection of American Baskets written by Renwick Gallery curator Nicholas Bell. 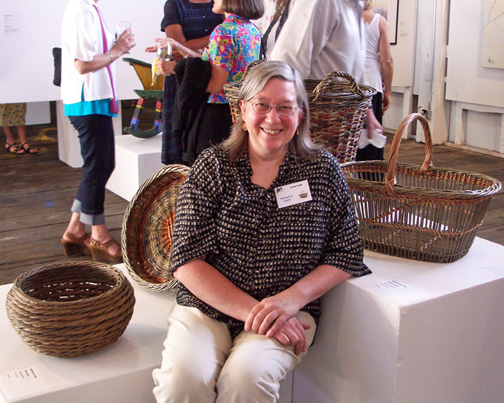