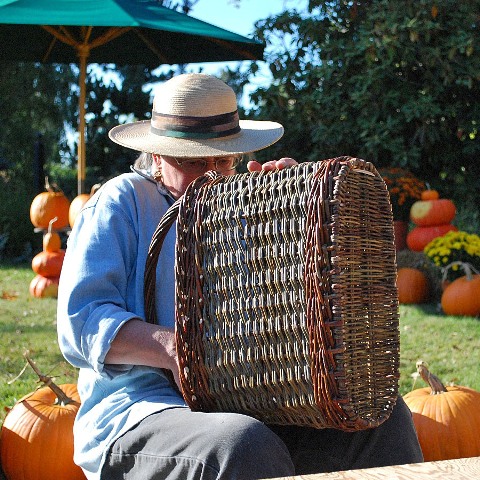 This past weekend Katherine was at the farm of our friends Eddie and Todd Gordon as part of the annual Skagit Valley Festival of Family Farms. Every year about a dozen farms in the valley host an open house for visitors to enjoy and explore the diversity of our farm community. Katherine has been doing a willow basketmaking demonstration at Gordon Skagit Farm the past five years.  It’s a real family event and Katherine spends a lot of time talking to inquisitive children, especially the girls. 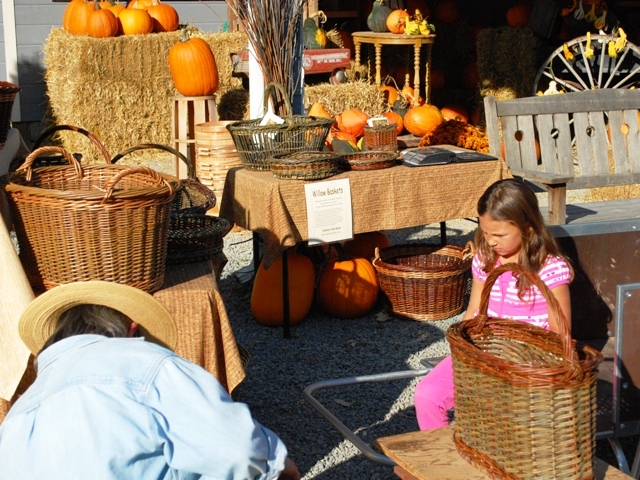 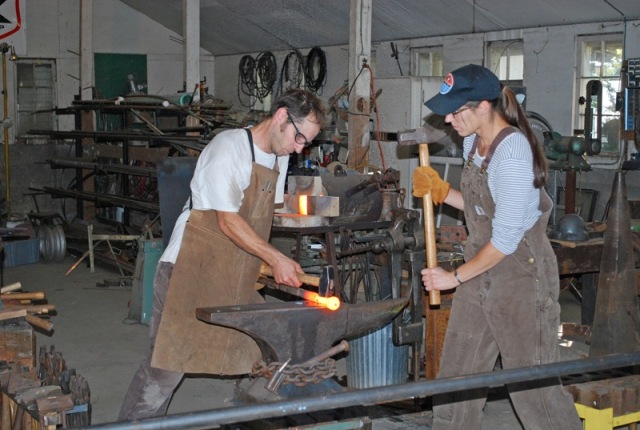 Eddie Gordon has invited a number of his friends to participate in the event to make it both fun and educational. Besides Katherine doing a basketry demo, there is Adair Orr doing some blacksmithing, helped out by his partner Missy Holland and his father Frank Orr. Julie Blazek sets up with honey bee info. Then there are goodies like hot cider and baked goods by the La Conner school culinary program run by Georgia Johnson. 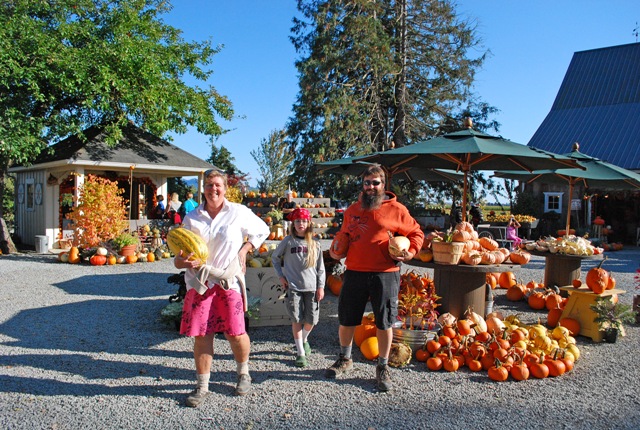 Of course, the real draw is the fabulous variety of pumpkins, squash, and gourds that the Gordons grow and display so well. It’s a great spot to run into friends as well, like my friends Vicki and Randy who have a  farm down in Silvana. They were checking out some of the unusual squash for their own table or perhaps to add to their list of produce they produce for their CSA someday. 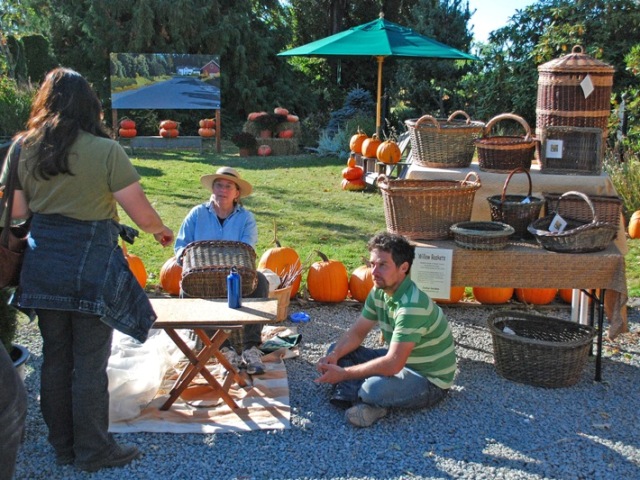 That’s the head pumpkin getting a quick chat in with Katherine. Thanks Eddie. 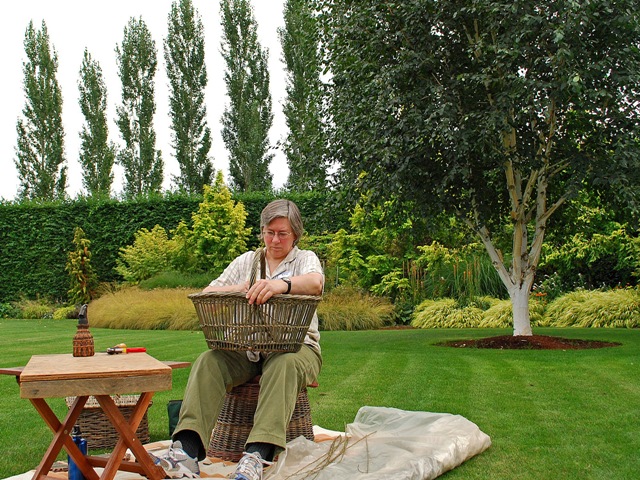 Katherine participated in an event this past Friday evening at Juntunen Farm & Gardens in Mount Vernon billed as a garden party and fundraiser for Seattle Children’s Hospital. Several groups helped organize the event including Skagit Artists Together of which Katherine is a member. Past President Thais Armstrong helped gather several artists from the group to come out and demonstrate their work in a beautiful garden setting that has been created by Rod and Mari Juntunen.  There were also informational booths for SAT and the Museum of Northwest Art. 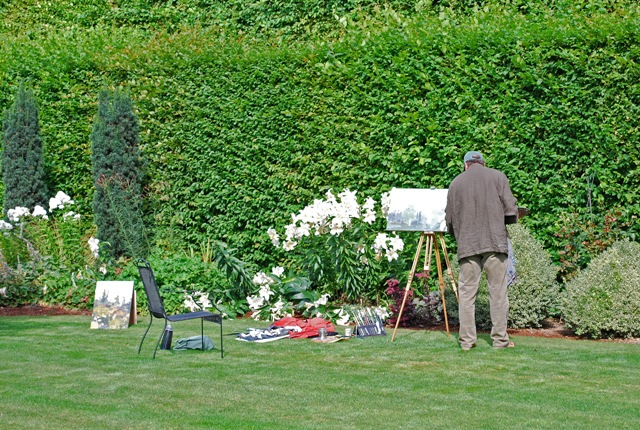 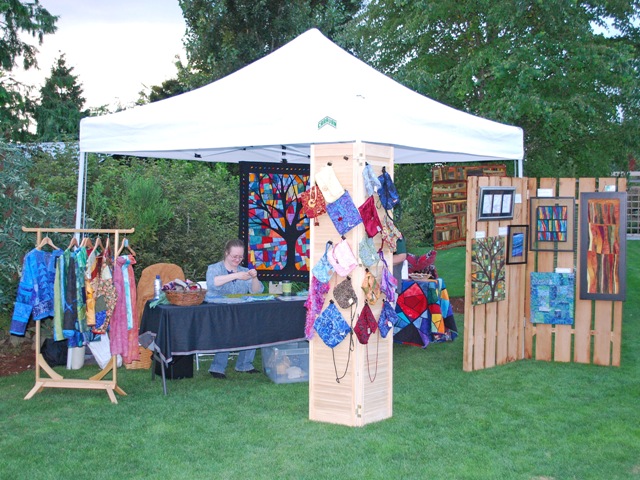 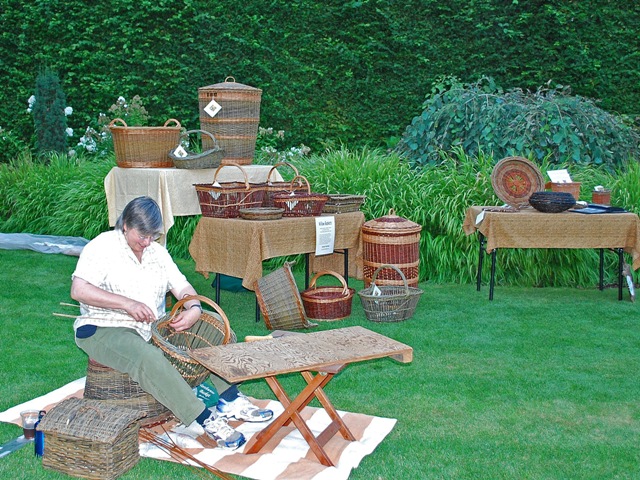 Katherine made a lovely oval fitched market basket during the event which Rod Juntunen’s sister purchased. 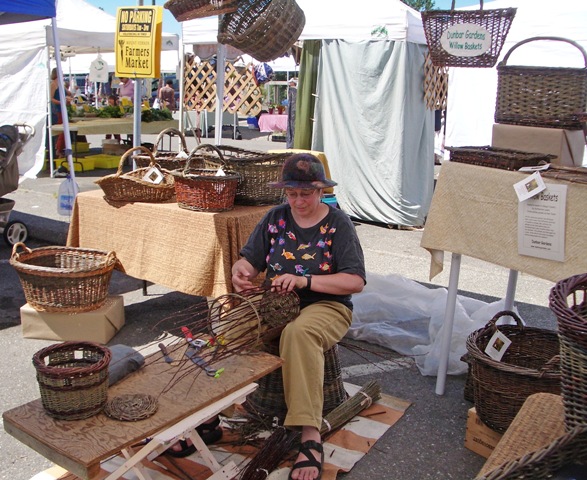 This Saturday is the start of our local farmers market. Katherine likes to set up a booth at the market a few times each year, especially the opening day. It’s an opportunity to see local friends and market her baskets and basketmaking classes. Besides she has invested in the markets success with her volunteer efforts as a past board member.She likes to bring her weaving set-up and some willows to work on a basket. Demonstrating her craft always generates interest in her baskets.

Our involvement with farmers markets goes back to 1983. We were twenty somethings working for an organic farm out near Sequim, Washington. We were getting a funky house to live in and food from the farm, but our only cash income had to be generated from a farmers market. Of course, we were given a small local market to attend by the guy we were working for. Sequim has a large retiree population so there were a lot of early risers on Saturday morning. We had to be set up for sales by 6:30 AM and by 9:30 we were usually the only ones left in the parking lot! These were the days before it was hip for the younger crowd with families to go to the farmers market.

Later in our “career”, when we had our own farm we went to one of the country’s historical market places – the Pike Place Market in Seattle. In the late ’80s and 90’s, organic produce was still relatively new to the market. Some of the vendors didn’t even believe we were growing such a wide selection of good looking vegetables and herbs. Katherine always put on a nice display in the small 8 foot table that growers were allotted. She even managed to get featured in an article in Sunset magazine in 1994 called “The farmers market frenzy”. Excerpting from the article: “This is the eighth year Katherine Lewis and Steven Lospalluto have sold produce at Pike Place Public Market in Seattle…They are part of a new breed that has chosen farming as a way of life…Today, Lospalluto picks corn and has the truck loaded by 5 A.M. Then Lewis makes two restaurant deliveries and arrives at the market by 7. She’s assigned to a spot she’s had often in the day stalls…With some help, Lewis lays out a display of squash blossoms, beans, celeriac, candystripe beets, zucchini, and other vegetables and herbs–about 20 kinds, from parsley to lemon verbena. Everything is organically grown…Lewis and Lospalluto have sold at weekend markets in Sequim and Puyallup, but prefer Pike Place, which has a week-long schedule (they’re there four times weekly, in season) and a clientele very interested in food.” (written by Jena MacPherson) 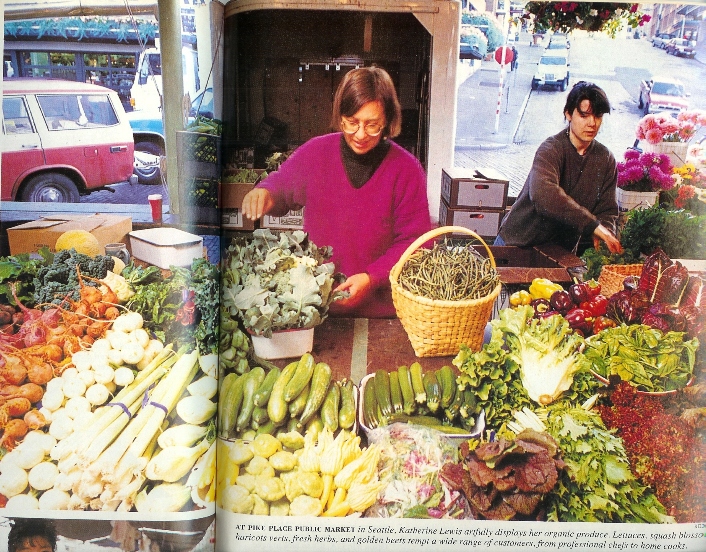 The photo is a scan from the Sunset article and taken in September of 1993. (Back then we marketed under the farm name Lombrici’s.) That’s Chris Allen on the right who worked some market days with Katherine (yes that’s Katherine on the left). Chris still lives in Seattle and works for Murdock and White in the specialty foods business.

But those long days! We haven’t sold produce at farmers’ market for about four years. These days we sell our vegetables, apples, and other garden goodies here on our small farm. It is a lot easier to pack up the willow baskets and necessary market booth stuff and head down to our local market. Besides, these days there is a growing number of farms heading to the farmers market with their farm fresh goods. But not too many willow basketmakers! 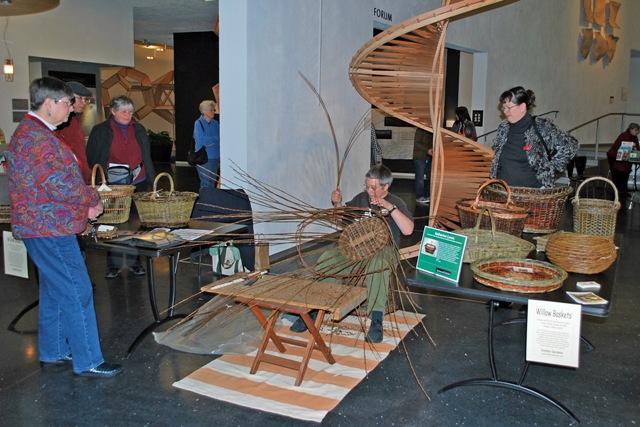 Katherine was invited to participate in a basketry demonstration day at the Bellevue Arts Museum this past Saturday, Feb. 7. Another one of a series of events surrounding one of BAM’s current exhibits: “Intertwined: Contemporary Baskets from the Sara and David Lieberman Collection (through March 22, 2009). There were five demonstrating artists – Dona Anderson, Dorothy McGuinness, Bill Roeder, Judy Zugish, and Katherine. There was also a “hands-on weaving” table staffed by members of the Northwest Basket Weavers Guild including Mary Irvine, Mary Auld, Carol Williams, Pat Reese, Pat Rytkonen, and Claudia Mullek. There were quite a few people taking in the demos as well as the great exhibits. Katherine made an oval shopping basket for her demonstration. One of the fun moments comes when she is “staking up” the basket. It takes a lot of floor space but always attracts an audience. 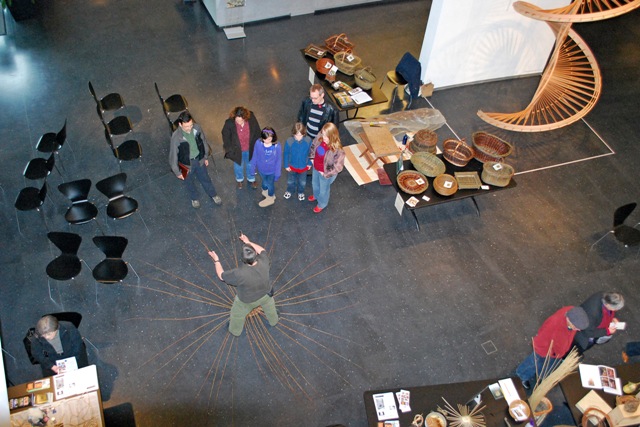 Katherine staking up the basket

Some more of the talented participants: 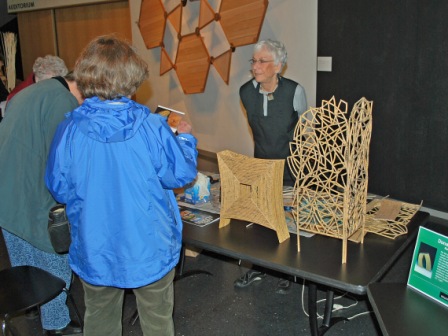 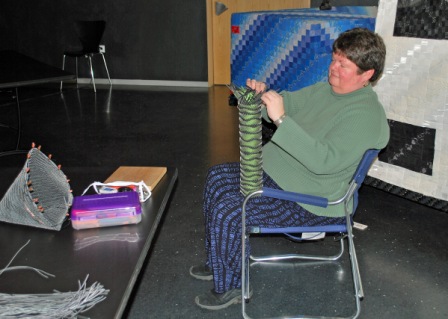 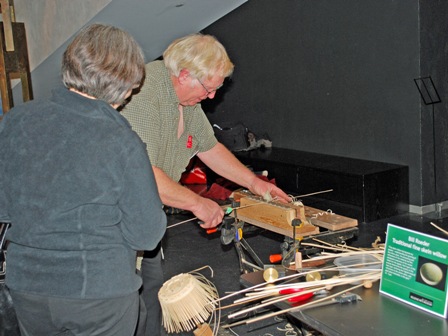 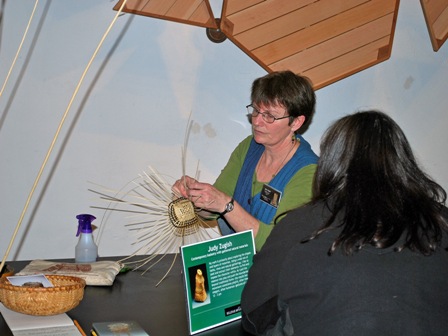 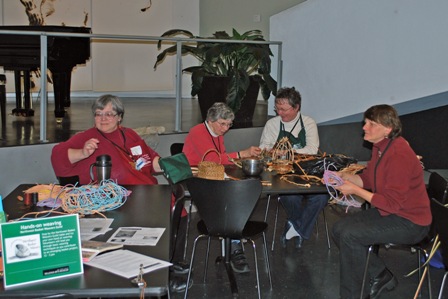 After the day’s events, we viewed the museum exhibits. It was Steve’s  first view of the Intertwined exhibit. There was some great works. A few that stood out for me were baskets  by Leon Niehues, Pearl Nuvangyaoma, Sally Black, Mary Black, Dawn Walden, Fujinoma Noboru, Carol Stein, and Dorothy Gill Barnes.

Then we went out into neighboring Bellevue to find something to eat. Saturday night in downtown was a sensory overload for this country bumpkin! 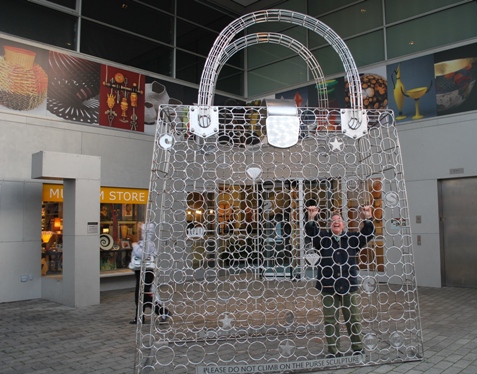